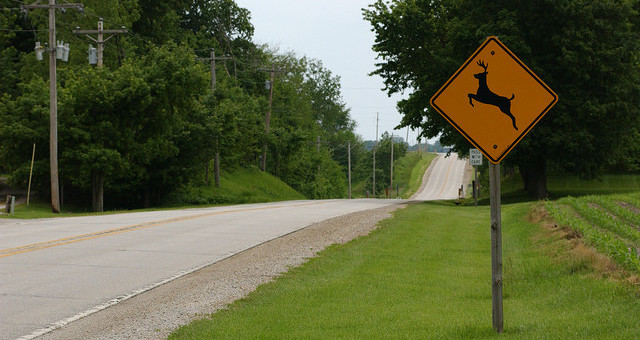 Although no one wants it to happen to them, collisions with animals are unavoidable across the driving population. However, you can arm yourself with knowledge that will help to reduce your chances of hitting an animal.

Wild animals near roads are likely to be most active at particular times of the day. At dusk, the temperature starts to drop and nocturnal animals spring to life in search of food and water. Similarly, dawn is a particularly active time as these animals return to their shelters for sleep. These times are particularly hazardous as the lack of light makes animals difficult to see and reduces the ability of drivers to detect and react to their presence.

Domestic animals are less predictable as their movements aren’t dependent on the search for food and water. A pet on the road likely means they’re out of their yard or house and their owner is unaware that they’re in danger. For this reason it’s important to effectively scan at all times, regardless of the lack of traffic and low speed limits in suburban areas where domestic animals are more likely to be encountered.

Wild and farm animals live in country areas. Water drains to the side of the road promoting the growth of lush grass for eating and creating pools of water for drinking. As such, you’re far more likely to encounter animals on or near the road in country areas. Despite the high-risk times above, it’s important you always remain alert in country areas.

Watch out for road signs that warn animals are more likely to be crossing in the area ahead. Stay alert and adjust your driving (e.g. slowing down to reduce stopping distance and give yourself more time to react) in these areas.

Although a road rule that should be followed at all times – you should avoid speeding on quiet, country roads. Although a speed limit may seem low for the conditions, the low limit may have been put in place to prevent collisions with animals.

Collisions with domestic animals are most likely to occur in suburban areas near homes.

How to react to an animal

If you see an animal on the side of the road, slow sown and try not to startle it. Animals don’t think about traffic and are likely just seeking food (grass and water can be more plentiful near roads than in paddocks).

If you encounter an animal on the road it may be startled, scare and panicked in the presence of an oncoming vehicle – making it unpredictable.

Animals can be slow moving, making it difficult for them to react. If you see an animal with plenty of time to react - slow down and be prepared to stop. Steer around the animal slowly, trying not to startle it.

Alternatively, animals can be fast moving and appear suddenly, removing any time to react. In this situation you should maintain your course and brake to slow down. Even if you will hit the animal, you should resist the urge to swerve. Swerving at speed could cause you to roll your vehicle, lose control and/or move into oncoming traffic. This may endanger yourself, your passengers and other roads users.

It’s difficult to anticipate how you will react in the moment but it’s important to remember that your life and the lives of other road users are more important than an animal’s. Although we want to avoid the death of an animal whenever possible, the actions you take to do so should not endanger a person in any way.

Although circumstances differ, the safest action when an animal suddenly appears on the road in front of you is to remain on course, try to slow down as much as possible and hit the animal.

If you are involved in a collision with an animal, you can read our post on how to react safely and appropriately.

Share this page with your friends so they can pass their next NSW driving test:

Blog posts related to your licence: